Hi! My name's Drayocat (aka Drayo) and I'm another one of the billions of people here on the internet who posts random things that rarely, if ever, get noticed.

I'm pretty much just posting this to sort of explain what the actual heck I'm doing here. I used to write about video games and stuff; I did reviews and first-impression type things, but I haven't written one of those for about 11 months now, so I decided I was going to shift the focus of whatever this website is to a project I've been working on, called Everfall.

Technically it's multiple projects; I'm writing a novel called The Whisper in the Stars (WITS) as well as working on an RPGMaker game called Crestfallen, both set in the kingdom of Everfall, and of course, regularly writing lore and making more characters.

Some of my friends are helping me work on Everfall and some of the projects that go along with it, so if I'm being honest, this is more for our sake, to have a dumping ground for all the lore and characters and whatnot, than for the sake of trying to get popular on the internet or whatever people do with these sorts of blogs.

Welp, that's all from me! I'll attach a map of Everfall to this post, for those wanting to get an idea of what it looks like, and I'll probably start posting more in-depth articles about the lore of certain areas and characters.

With all that said, stay determined everyone, watch out for birds, and enjoy your next 24 hours! 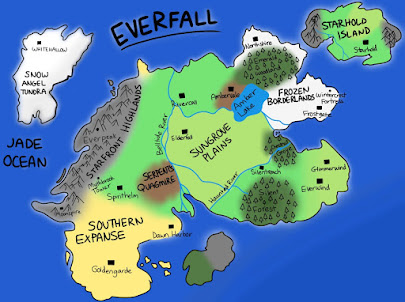 Posted by Drayocat at 8:40 AM No comments: